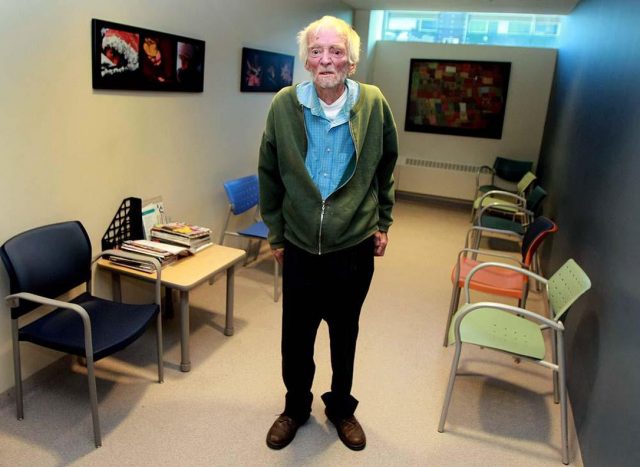 One old man died. Shame on us

Al Gosling died this past weekend; there was, finally, nothing his doctors could do and no more medicines to help, and so the machines that kept him alive were shut down.

Al’s friend, Harry Kopyto, was by his side when he died. Harry said, “I tried to reach him. I shouted in his ear. I held his hand. I hugged him. There were so many tubes and monitors. Who knows if he heard me?”

Now let me be blunt: old men die all the time – and Al was 82 years old – but I wonder if he would have died like this had he not been evicted by his landlord!

Let me remind you:

Al came home one day some months ago and found that the lock on the door of his bachelor apartment had been changed.

From there to the grave.

Al was a long-term tenant.. In recent years, he may have had some trouble with his rent. I suspect the trouble was bureaucratic.

According to the landlord, Al neglected to fill out his annual declaration of income a couple of years in a row; the declaration is a requirement if your rent is geared to income. In the absence of such a valuable declaration, The landlord hit Al with market rent and he ran up arrears and was threatened with eviction.

The landlord says they tried to get through to Al, to reason with him. I am no judge of what they did or did not do. All I know is that, in the end, they threw him out.

You and I pay taxes. Our taxes fund social housing. That means you and I are the landlord, and Al Gosling was evicted in our name.

You might argue that the threat of eviction is a way to get an old man to the table, in order to reach a mediated settlement. I can argue just as easily that, for want of a piece of paper, Al Gosling was kicked onto the street.

The landlord says it has an eviction prevention policy; if so, why was Al Gosling evicted? And why is the landlord still serving eviction notices to other tenants, some of whom have special needs?

Is the landlord using the Landlord and Tenant Board as an instrument of social work? If so, I am disgusted.

There were several of the so-called helping professions on the fringes of this case; where were they when it mattered?

Was there no one person with the skills, the heart, the imagination, the initiative, the persistence or the ingenuity to find out if Al needed care, or intervention, or some simple human contact?

I can’t think of one problem solved by kicking an old man onto the street.

How many other Al Goslings are there in our midst? We need answers. We need a public inquiry.

This entry was posted on Thursday, July 8th, 2021 at 6:30 pm and is filed under fmta, Good Tenant Tips, Landlord and Tenant News, landlords eviction murder, Ontario Landlord and Tenant Board, tenant rights, tenants eviction death, tenants suicide. You can follow any responses to this entry through the RSS 2.0 feed. Both comments and pings are currently closed.