How Much Can Ontario Landlords Raise The Rent in 2021? 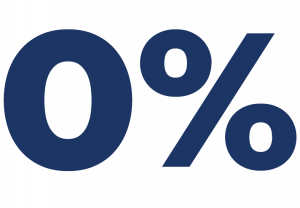 Ontario landlords are shocked at the announcement by the Minister of Housing that in 2021 there will be a “rent freeze” and small landlords will not be able to raise the rent at all! 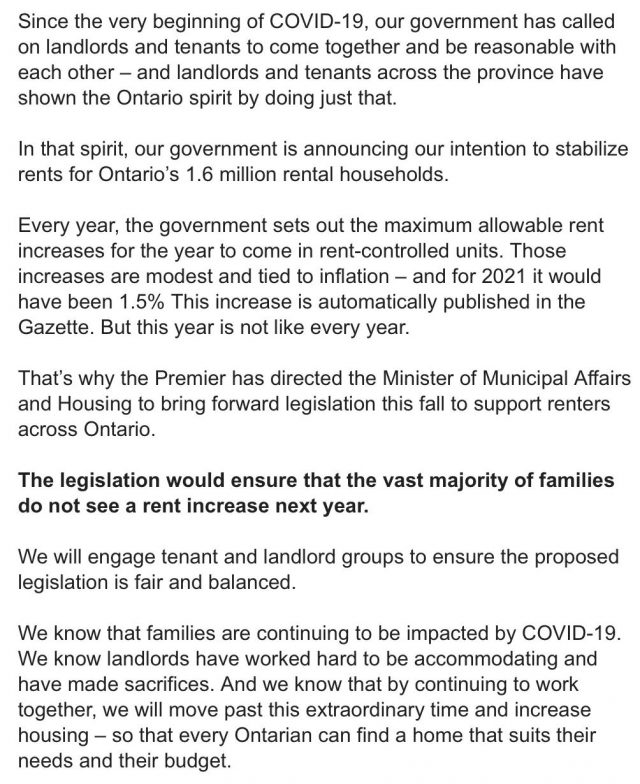 Many Of Our Small Landlords Members Are Furious!

In our forums many of our members are furious at this. While our members understand the challenges tenants face, they are not happy to have their challenges put on our backs due to lack of government action:

“Why doesn’t the government just help out tenants instead of pushing their policy failures on the back of small landlords?”

“How about stopping our property taxes for a year? How about capping insurance rates and condo fees?”

“I haven’t raised the rent on my long term tenants for years. But now the idea of not being able to is total overreach and frightening for my business.”

How Did They Come Up With This Figure?

The Ontario annual Rent Increase Guideline has always been based on the Ontario Consumer Price Index (CPI). This is a measure of inflation.

So The CPI Is Zero Percent?

No, the 2021 rent increase guideline of 0%is purely political and breaks the current law!

An OLA member with contacts in the bureaucracy and in the LTB stated this would happen as a political ploy to appease renters who are not getting the support they need in things such as interest free loans and grants.

How can pay for my increased costs when renters aren’t even paying and I can’t increase rent?

Small Ontario landlords need to raise rents to continue to maintain our safe and attractive properties. Instead of helping tenants in this crisis, the burden being put on struggling small landlords.

This not only unfair, it’s cruel and we call for a re-examining of this ridiculous policy. If the aim is to get every small landlord/investor to sell their units as soon as they can evict their non-paying tenants, it’s great.

Get ready for the big sell-off

If not it would seem to many of our members that small landlords are not welcome in the Province of Ontario.

Many landlords and investors are feeling betrayed. Feels like Bob Rae 2.0. And we know what happened during the next election for Rae in 1995.

Tags: ontario landlord rights, raise the rent, rent
Posted in 2021 rent increase guideline ontario, Landlord and Tenant News, rent increase 2021 | Comments Off on How Much Can Ontario Landlords Raise The Rent in 2021? “I Need The Province To Help Me Be Able To Protect My Tenants, Keep My Rents Low, And Run A Successful Rental Business!”

It wasn’t that long ago the challenges small residential landlords face was rarely in the media. While landlords were dealing with ridiculously unfair rules which allowed clever tenants to manipulate the system, it was all hush-hush.

There was nothing. And small landlords kept getting ripped off and losing thousands of dollars in lost rent and damages.  (And also many stressful sleepless nights).

The Corporate landlords were silent. No one was sticking up for us, the small landlords who have invested our hard-earned money to create high quality rental housing across Ontario.

Things began to change when a landlord who rented to a “Tenant From Hell” became an OLA member and we got the message out loud and clear. This landlord was only one of a string of landlord victims and she wasn’t going to go down without a fight!

It was so shocking that these types of tenants could easily rip-off unsuspecting small landlords that the media noticed and the challenges of small residential Ontario landlords finally started to become known.

(For your information this tenant ended up criminally charged for their actions against small Ontario landlord, which would not have happened without the support of OLA members).

The news Ontario was going to treat the smoking of marijuana similar to simply smoking tobacco was a huge story. The news was that people would be able to smoke weed in public spaces without any worries.  So toke up in parks, soccer fields, and while you are walking down the street.

How Is This Different Than The Previous Rules?

Under the Liberals cannabis was only going to be sold in government controlled stores and people wouldn’t able to smoke it in public places.  The new rules will allow marijuana to be smoked by anyone who is over nineteen years old and where the smoking of tobacco is allowed.

According to the Ontario attorney general: “If you’re able to smoke tobacco in your home the you’ll be able to use cannabis as well.” “I’m just following the law! Give me a break!”

The media were eager to learn from Ontario Landlord Association how landlords viewed the new rules and how they would handle tenants potentially smoking weed in their rental properties.

The Ontario Landlords Association was interviewed by the Canadian Press for CTV News and a member explained why small residential landlords are worried and need to be protected.

Our concerns on legalized recreational marijuana were made clear.

Legal weed will create a lot of big problems for both Ontario landlords and Ontario tenants, including:

1. Conflict Between Tenants Who Smoke Weed and Those Who Are Exposed to Second Hand Marijuana Smoke

2. Important Safety Issues For Those Who Grow Marijuana In Their Rental Units

3. Expensive Clean Up Costs When Cannabis Smokers and Growers Move Out Need

4. We Need A Change In The Residential Tenancy Act For FAST EVICTIONS Of Tenants Smoking Weed Illegally (Within 24 hours)

The message was loud and clear.  The good news is story and the comments on why landlords need to be protected spread to other important media: It was on CityNews. The story also go picked up by the highly influential Financial Post.

Landlords And Our Rental Properties Need To Be Protected

The government has stated their goal is to increase affordable housing and that means encouraging more people to invest in residential rental properties and become landlords.

Landlords need to be able to manage risk, be able to provide safe homes for our tenants and be able to earn some profit in return for managing the property and investing our capital to increase the provincial rental stock.

In the past year the Ontario Landlords Association has worked tirelessly to let everyone know our situation.

We’ve done this with stories on CTV, CityNews, The National Post, The Financial Post…and also Vice, CBC, Toronto Star, Bloomberg International and more. We have also made sure the Premier and Housing Minister are aware of our concerns with our “Take Action” campaign.

Big changes take time and the new leadership in Ontario has a lot on their plate. Also the landlord/tenant file is a very sensitive one. So let’s keep our message strong and get the changes we need.

As landlords across Ontario agree:

“I Need The Province To Help Me Be Able To Protect My Tenants, Keep My Rents Low, And Run A Successful Rental Business!”